Ios is a Cycladic island of the Aegean Sea. Ios is also called “Nios” by the local inhabitants (niotes).

The surface of Ios is estimated at 108,713 square km while it has a coastline of 87 km. It is located between Naxos, Sikinos and Thira. The most important bays of the island are Gialos, Mylopotas and Manganari.

The most crowded beach of the island is Mylopotas, which is very close to Chora, while other nice beaches are Manganari, Gialos, Kolitsani, Koumbara, Kalamos, Sapounohoma, Papa Beach, the beach of Psathis and Agia Theodoti. There are also many smaller beaches, access to which is quite difficult. Visitors to the island can enjoy water sports. Windsurfing, wake-boarding, jet skiing, diving, and even kitesurfing are some of them. In Mylopotas and Manganari, as well as in the Port, there are organized enterprises of this kind. 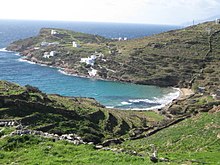 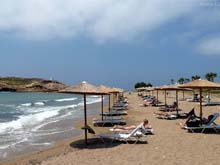 Apart from Chora, other settlements on the island are the seashores of Ormos, Psathi, Agia Theodoti, Mylopotas, remote Magganari and Epano Kambos located inside Ios.

The position of Ios.

Ios took its name in antiquity from the word Ia, the flowers that rose abundantly on the island. In other words the name of Ios owes it to the Phoenician word Ios, which means a pile of stones.

Initially Ios appeared to have been inhabited by the Carians and later by the Minoans, the Achaeans and the Phoenicians, who left the island. In fact, Ios was known as Phoenix. In the 10th century BC century Ionians occupy the island. According to Herodotus in Ios, his mother’s hometown, Homer was buried.

Later Ios joined the Athenian alliance and then passed into the sovereignty of the Macedonians and their successors.

During the domination of Rome and Byzantium, the island passes into obscurity and is plagued by pirate raids. In 1207 Ios passed to the domination of Mark Sanoudos and in 1269 he returned to the Byzantines to follow a new period of Venetian domination from 1296 to 1537 when he was captured by the Turks. In the early 15th century, Marcos Crispos settled the island with Albanians due to a lack of workforce. During the years of Ottoman rule, Ios was a man of French pirates who, in 1668, in Burlotos sea region, defeated the Turkish fleet. Tournefor reports in 1700 that there were many Albanians or Arvanites (descendants of 1579 settlers) inhabited outside the Greeks, and foreign pirates.

During the Greek Revolution of 1821, Ios also participated actively, which was the home of Filikos Spyros Valletas.

Today, Ios belongs to the Holy Metropolis of Thira, Amorgos and Islands, and especially to the Prehistoric District of Thira. The island is known for its many churches. It is said to have 365 churches and chapels. The most famous is Panagia Gremiotissa, which dominates the highest point of Chora.

Mylopotas is the Museum of Modern Art in Ios and has been housed since 1993 in the manor of the French former director of French broadcasting, Jean Marie Drot, while in the area of Tsoukalaria since 1997 an open theater with a capacity of 1000 seats, named after the poet Nobel Prize Elytis .

The language idiom of Ios is today in shrinking and is only found among the elderly residents. It belongs to the classic distinction of the modern Greek idioms of G. Hadjidakis in the southern idioms and indeed those that display many common elements with the Cretan dialect.